The classic computer around us uses bits and logic gates for binary operations. In physical hardware, such arithmetic is primarily achieved by the special conductive properties of semiconductors. After decades of development, we have been able to integrate hundreds of millions of transistors on a tiny semiconductor chip, enabling high-performance classical computing.

Quantum Computing, on the other hand, aims to use “quantum bits” and “quantum logic gates” with quantum properties such as superposition and entanglement to perform calculations. This new computing paradigm could achieve exponential acceleration in important areas such as search and large number decomposition, making possible some of the hyperscale computing that is not currently possible, potentially changing the world profoundly in the future. On physical hardware, such quantum computing can also be implemented by some structures with quantum properties (e.g., superconducting Josephson junctions).

If you want a deeper understanding of quantum mechanics and the fundamentals of quantum computing, it is recommended to start with the following two books.

In classical binary computers, we use bits as the basic unit of information storage, and a bit has only two states, 0 or 1. In a quantum computer, we use Quantum Bits (Qubits) to represent information. Quantum bits also have two pure states

. However, in addition to these two pure states, a quantum bit can also be in a superposition state between them, i.e.

(where a and b are complex number,

are both vaild quantum states. We can also use a vector to represent the state of a quantum bit. If we let

We can also use the Bloch Sphere to graphically demonstrate the state of a single quantum bit. The topmost part of the sphere is

and the bottommost part is

. The unit vector from the origin to any point on the sphere can be a state of quantum bit. 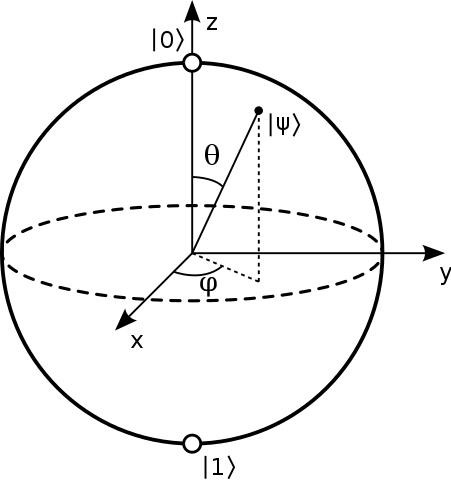 It is worth noting in particular that although quantum bits

have quite a few possible states, once we observe them, their states immediately collapse 2 into one of two pure states of

For example, the quantum NOT gate can be expressed as

, so when we act the quantum NOT gate on the pure state

. In fact, quantum NOT gates

are equivalent to rotating a quantum state 180 degrees around the X axis on a Bloch sphere. and

is on the X-axis, so no change). Quantum AND gates and OR gates 3 are slightly more complex due to the multiple quantum bits involved, but are equally achievable with matrices of greater size.

, then quantum logic gates as transformations of quantum bits can in fact be completely unrestricted to AND, OR and NOT. In fact, any matrix 4 that meets certain conditions can serve as a quantum logic gate. For example, transforms that rotate quantum states around the X, Y and Z axes on the Bloch sphere

is the angle of rotation and when

they are noted as

that can convert quantum states from pure to superposition states, which occupies an important place in many scenarios of quantum computing.

When we mark quantum bits, as well as quantum logic gates, sequentially on one or more parallel lines, they constitute a quantum circuit. For example, for the process we discussed in the previous section, using quantum NOT gate

to transform the pure state

, we can write the quantum circuit as follows. 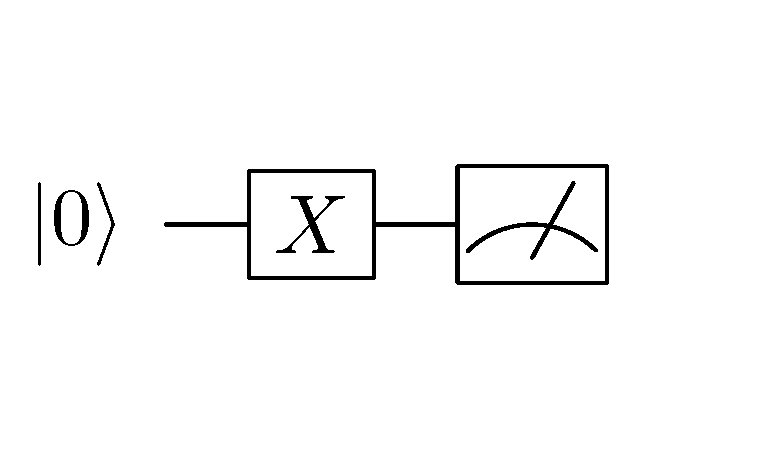 In a quantum circuit, each horizontal line represents one quantum bit. The leftmost

and the dial symbol on the right represents the measurement operation. The meaning of this line is “to perform quantum NOT gate

operations on a quantum bit whose initial state is

, so we can expect the final measurement of this quantum circuit to be always 1.

Next, we consider replacing the quantum NOT gate 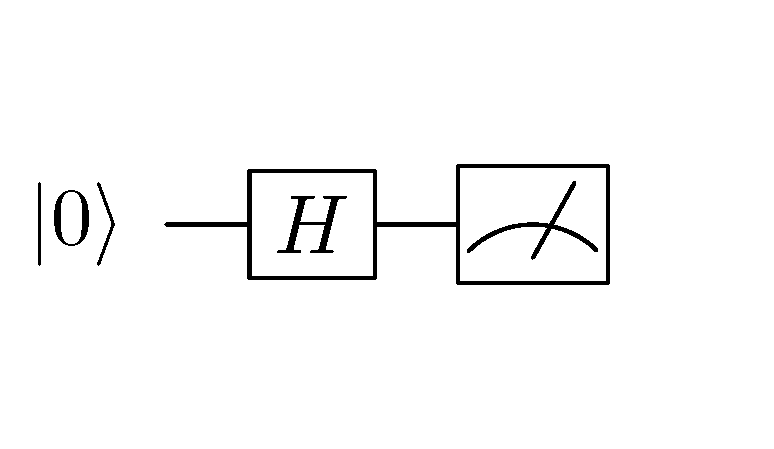 The matrix corresponding to the Hadamard gate is expressed as

, so we can calculate the transformed quantum state as

. This is a superposition state of

that collapses to a pure state after observation with probabilities of

. That is, the observation of this quantum circuit is similar to a coin toss. If 20 observations are made, the result for about 10 times are

and the result for 10 times are

Cirq is a Google-led open source quantum computing library that helps us easily build quantum circuits and simulate measurements (we’ll use it again in the next section about TensorFlow Quantum). Cirq is a Python library that can be installed using pip install cirq. The following code implements the two simple quantum circuits established in the previous section, with 20 simulated measurements each.

The results are as follows.

It can be seen that the first measurement of the quantum circuit is always 1, and the second quantum state has 9 out of 20 measurements of 0 and 11 of 1 (if you run it a few more times, you will find that the probability of 0 and 1 appearing is close to

). The results can be seen to be consistent with our analysis in the previous section.

This section introduces the basic concepts of hybrid quantum-classical machine learning and methods for building such models using TensorFlow Quantum. 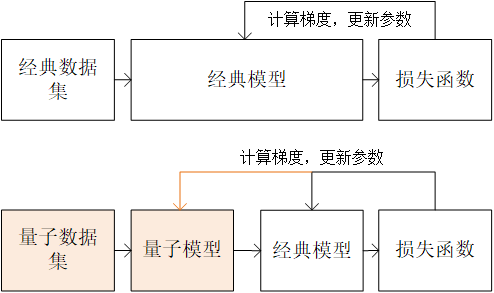 TensorFlow Quantum is an open source library that is tightly integrated with TensorFlow Keras to quickly build hybrid quantum-classical machine learning models and can be installed using pip install tensorflow-quantum.

At the beginning, use the following code to import TensorFlow, TensorFlow Quantum and Cirq

. A quantum dataset is also made up of data and labels, but each item in the data is a quantum state. Use the state of a single quantum bit in the previous section as example, we can write each data

. In terms of implementation, we can generate quantum data through quantum circuits. That is, each data

corresponds to a quantum circuit. For example, we can use Cirq to generate a set of quantum data using the following code.

In this process, we use a quantum gate cirq.rx(angle)(q) with parameters. Unlike the quantum gate cirq.X(q) and cirq.H(q) which we used earlier, this quantum gate has an additional parameter, angle , which represents the angle (radiances) of the rotation of the quantum bit q around the x-axis of the Bloch sphere. The above code generates 100 quantum data items, each of which is randomly rotated

. Quantum datasets have applications in quite a few quantum-related fields such as chemistry, materials science, biology and drug discovery.

counterclockwise around the x-axis of the Bloch sphere for 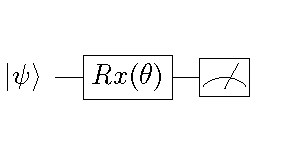 Example of a parametric quantum circuit¶

The first parameter of tfq.layers.PQC is a parameterized quantum circuit established using Cirq and the second parameter is the measurement method, which is measured here using cirq.Z(q) on the Z axis of the Bloch sphere.

The above code can also be written directly as

In the following code, we first build a quantum dataset where half of the data items are pure state

rotating counterclockwise around the x-axis of the Bloch sphere

) and the other half are

). All data were added Gaussian noise rotated around the x and y axis with a standard deviation of

. For this quantum dataset, if measured directly without transformation, all the data would be randomly collapsed to the pure states

with the same probability as a coin toss, making it indistinguishable.

To distinguish between these two types of data, we next build a quantum model that rotates the single-bit quantum state counterclockwise around the x-axis of the Bloch sphere

radians. The measured values of the transformed quantum data are fed into the classical machine learning model with a fully Connected layer and softmax function, using cross-entropy as a loss function. The model training process automatically adjusts both the value of

in the quantum model and the weights in the fully connection layer, resulting in higher accuracy of the entire hybrid quantum-classical machine learning model.

It can be seen that the model can achieve 95% accuracy on the training set after training, and

, it happens that the two class of data items are close to the pure states

, respectively, so that they can be most easily distinguishable.

This handbook is written in 2020 AD, so if you are from the future, please understand the limitations of the author’s time.

This matrix is known as unitary matrix .